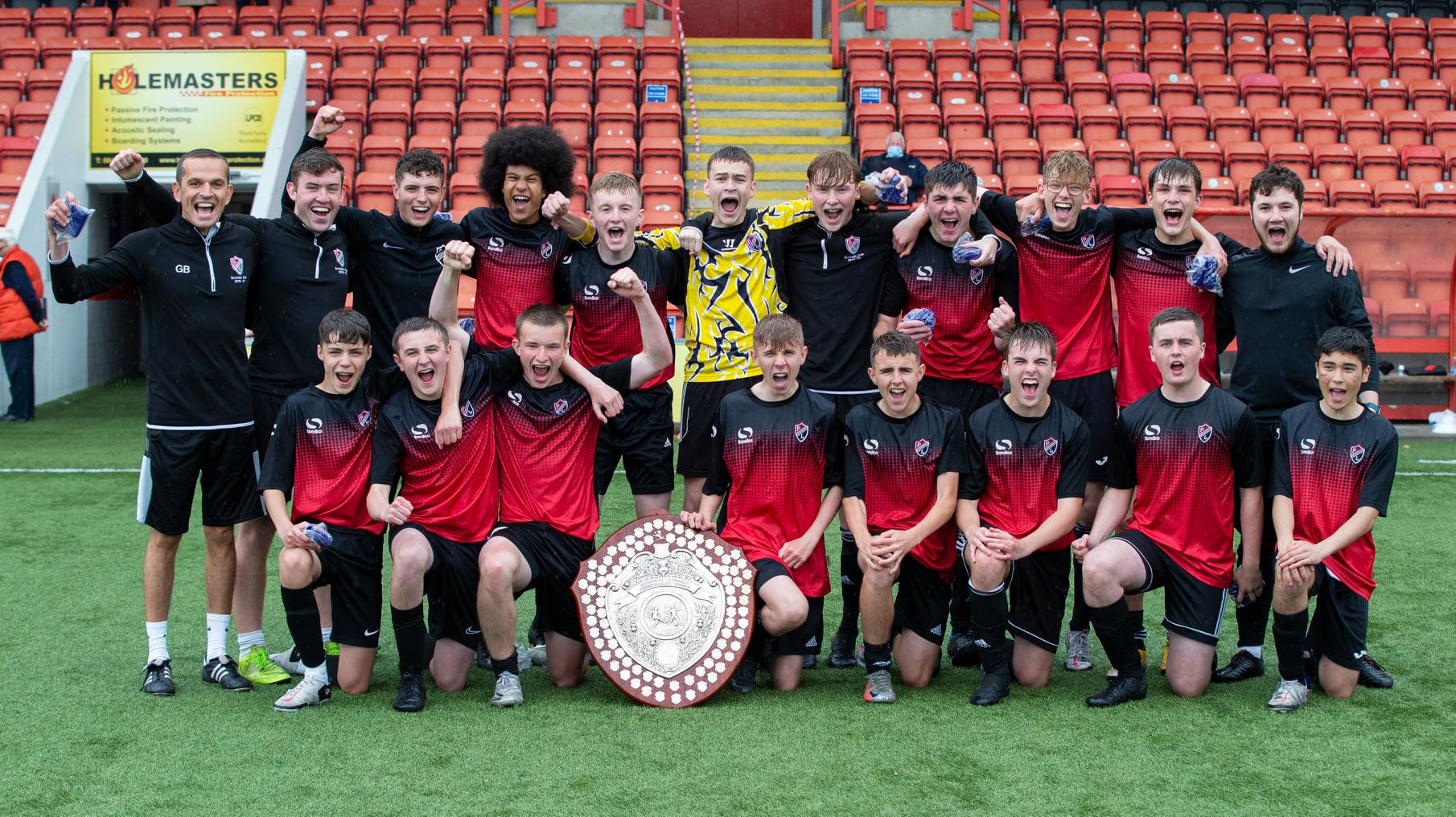 Preston Lodge High School football team have reached the Scottish Cup Final for the first time in the school’s history. This is the first major final that the school have reached and the achievement from the team has been four years in the making through our school of football curricular programme and the Active Schools football sessions that the boys have attended since S1.

The school of football programme which has been running for S1 to S6 has allowed the footballers in the school (boys and girls) the opportunity to extra provision through curricular time with a focus on developing them through a football programme which will allow them to access a Youth Achievement Award (YAA) at national 4, national 5 or advanced higher. In addition to this we are working to provide the pupils with experience through this in coaching and leadership programmes which will allow them to coach through our Active Schools programme, which is linked to a future leaders programme leading into college, university and work.

Our U16s have benefited from this since S1 and have reaped the rewards of this through their success on and off the pitch. With 7 trophy wins out of 8 in S1/S2 followed by a run to the final of the East Lothian Cup in S3 and the semi-final of the Scottish Cup, both which were postponed due to Covid.

Fortunately the boys got the chance to play the Scottish Cup semi-final which seen a 3-1 win against Notre Dame, with goal from Charlie Russell, Daniel Filigonio and Finlay Yule seal their place in the final against St Maurice’s from Cumbernauld. In true fashion of the Scottish Cup run there was a delay in the final due to a covid outbreak at St Maurice, but thankfully their players pulled through and the final was able to be played after the isolation period for the team.

The match was played at the “Penny Cars Stadium” in Airdrie on Wednesday 23 June. With the match being streamed live the community got right behind the team with a stream in the school for the pupils to watch, a stream in Prestonpans Labour Club for the families, as well as some streets holding an outdoor airing and staff/pupils watching it at home. The stream was watched as far as Australia and Las Vegas.

Prior to the match the boys were given a warm send off with a video of their achievements before being piped out by school piper Max Letchford and a group of parents and pupils there to clap them onto the bus. This was great and a pre match meal beforehand gave the boys an experience of a big match before travelling to Airdrie.

Preston Lodge had some pressure early on in the match from St Maurice which led to the back three of Ben McCabe, Ben McCabe and Luke Reid having a lot of early touches of the ball as well as clearances from the back. The pressure led to a two or three corners from St Maurice and this pressure finally told from a set piece corner which seen St Maurice take the lead after five minutes. After this Preston Lodge had a lot of possession and the nerves settled a bit. The usual flowing football wasn’t there from Preston Lodge, but Josh Laidlaw won a ball in midfield then Finlay Yule play an excellent ball out wide to Robbie Peffers who got behind the defence to put a cross into the box which was headed home by Daniel Filigonio to make it 1-1 after twentyminutes. A change in shape from Preston Lodge seen a lot more of the player on the front foot with Nathan Stewart and Callum Aitken progressing from wing back to put pressure on higher up the pitch. A save from Ben Taylor late on in the first half was as much action as both goalkeeper seen with the ball in midfield for a large part of the game.

With the change in shape Preston Lodge were on the front foot from the start of the second half with Charlie Russell winning a lot of possession upfront so the team could get on the front foot. An injury to Callum Aitken early on in the second half seen Harris Reynolds come on upfront and he added pace to the team and put St Maurice defence under a lot of pressure with his runs. With Charlie Russell working hard alongside Harris, Preston Lodge started to create a few chances but unfortunately none clear cut enough to trouble the goalkeeper. Kieran Stewart replaced Charlie Russell with twenty minutes to go and brought energy to the midfield which again kept the pressure on St Maurice. However with five minutes to go St Maurice had two clear chance which brought Ben Taylor into action with two unbelievable saves to take the game to penalties. Unfortunately Ross Buckley and Stefan Sweeny were unable to get on but they have been a huge part of the success from S1 and have been outstanding when called upon.

Gavin Clark, headteacher at Preston Lodge High School, said: “It is an amazing achievement for the boys, and we are all incredibly proud of everything they have done to represent our community around the country.

“They are a really likable group of young men with enormous talent, and we are really delighted that they have done so well.

“They have made us all proud to be PL.”

Graeme Bennion, Active Schools Coordinator & Coach at Preston Lodge High School, said “After S2 I predicted at Sports Personality this was the next step to win the Scottish Cup. I believed the team were good enough and continued to get better throughout the years. The early round beating Stewart Melville, Currie and Levenmouth gave us belief going into a last 32 match against Broughton, who are an SSFA school of football. Unfortunately the match needed to be replayed after an injury to a Broughton player early on. Winning the replay 4-1 then gave us the stepping stone to work towards the final. An away trip to Duncanrig seen the team win 2-1 to progress to the semi-final. Unfortunately Covid pandemic seen us not play our semi-final for 14 months. However the boys train each time they could and the hard work has paid off with a 3-1 win in the semi-final and a win on penalties shows the character of the team. In all the matches we only had one home game, so to travel around Scotland and come to Airdrie, a mile away from St Maurice and win in unbelievable. The final two matches seen us play without Ethan Laidlaw who had signed a professional contract for Hibs. I am extremely proud of all the players, coaches and families who have supported us throughout. A first major tournament win for Preston lodge has been welcomed with huge support from the school and the local community and I will be forever grateful.