Determined swimmers push themselves to the limit 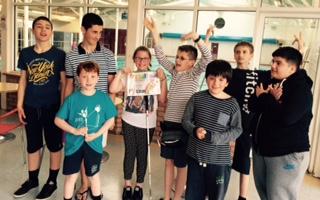 Matthew finished with a total of 26 lengths. This was a tremendous acheievment as his previous best was 16 lengths.

Angus was very determine to beat his previous best of 10 lengths and did just that, finishing with a total of 12 lengths.

Callum completed 2 lengths which was a fantastic effort by the young man!

The children decided which charities were to benefit from their hard earned money and chose a number of charities which meant something to them.

The charities receiving donations were -

Sharon Humble (Lead Coach for the Club) has worked hard with the children over the last term and was delighted by their efforts. The children have shown true determination to beat their previous best swims and are training very well. The progression over the past few weeks has been fantastic.