Golden Girl Going To Gold Coast In Search Of A Gold 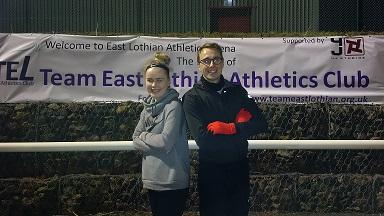 Congratulations to Maria Lyle, for her selection to Team Scotland. Maria will be travelling out to the beautiful Gold Coast, Australia, at the end of March, 2018, to compete in the 100m sprint at the Commonwealth Games.

Maria, who will be turning 18 in a few weeks, has had a tremendous and successful athletic career spanning almost 10 years.

At the age of 8 years old, Maria’s Mum, Susan Lyle (PE Specialist), noticed how running helped Maria’s C.P., whilst putting her through the Bleep Test at school. From there on, she joined Dunbar AC, then moved to Disability Sports Scotland, where she was noticed by our very own Jamie Bowie who also saw the potential she had and brought her to Team East Lothian. Through hard work, sweat and tears, with highs and lows along the way, Maria won her first International at the age of 14 and has since gone on to European, World and Paralympic success.

I asked Maria what her aspirations are for the Commonwealth Games and she said “To run to my race plan, have a good performance and, most of all, try my best”.

Training and nutrition have already intensified and she has had to strip back…especially from chocolate and biscuits; and eat a healthy balanced diet.

Despite the fact she has had to sacrifice some elements of teenage life such as parties and going out with friends, Maria says it’s all about getting a good balance between athletics, school and a social life.

Maria will travel out to Australia with Team Scotland, Jamie B will also be out there with the Gymnastics Team as well as to support Maria, and her Mum will join her there nearer to race day – when the jet lag has eased. Maria says that her parent’s mean the world to her, not least for what they have given up to help her but for the emotional and mental support they give to her day in and day out, in good times and more difficult times.

Everyone at Team East Lothian, Enjoy Leisure, East Lothian Council and Active East Lothian wish Maria very, very best wishes and we will all be watching and cheering her across the line in April.